Mrs. Ellen Nielsen, who lived in a town near Copenhagen, lost her husband in 1941, and became a fishmonger on the Copenhagen docks to support herself and her six children. She bought fish from the fishermen and resold them to passers-by. From time to time she would buy flowers from two brothers who also bought fish from her. One day, the brothers asked Mrs. Nielsen to help them find a fisherman who would take them to Sweden, where they could escape the Nazis. The two brothers explained to her that they were Jewish, and that the Germans had begun arresting Danish Jews. Mrs. Nielsen had not known the brothers were Jewish, and had not heard of the arrests. As soon as she heard the story, she offered to hide the boys in her home while she arranged for a boat which would take them to Sweden. In a short time, the boys were safely across the sound in Sweden. Through the fishermen, the Danish underground learned of Mrs. Nielsen’s act, and contacted her. As her work put her in daily contact with the fishermen, she was ideally placed to act as liaison between them and the underground. She accepted, and over a hundred refugees passed through her home on the way to Sweden during the following weeks. At one time, she had over thirty refugees in her home at the same time.

When she wasn’t helping Danish Jews to escape, she hid saboteurs for the underground. She was arrested by the Gestapo in December of 1944. “For three months she was in Vestre Prison, where the Gestapo tried unsuccessfully to get her to reveal the names of her contacts. She was then sent to Froslev Concentration Camp … and from there to Ravensbruck in Germany. Upon her arrival in Ravensbruck, she was summoned to the office of the camp commandant. `Mrs. Nielsen,’ said the commandant, `we know that you have been involved in the illegal transportation of Jews from Denmark to Sweden. ‘Mrs. Nielsen remained silent. `There is no point in denying it,’ said the commandant, `because he [sic]have proof. We know, for example, that you saved the lives of dozens of Jewish children. We even have some of their names. ‘There was no reply from Mrs. Nielsen. `No matter,’ continued the commandant. `The point is that we feel that since you were involved with the transportation of Jewish children in Denmark, we should give you a job here in Ravensbruck that would use to advantage your previous experience and interests. We are therefore giving you a job similar to the one you had in Denmark _ transporting Jewish children.’ Mrs. Nelson had no idea what the commandant meant. But she learned all too soon. Her assignment was to carry those Jewish infants too young to walk to the gas chambers where they were put to death. She was also made to carry them, after they were gassed, to the crematorium to be burned. When, after several weeks, she refused to continue at her macabre job, she was condemned to death and she was herself placed three times on the line leading to the gas chamber. The first time she saved herself by bribing a guard with a bar of soap which she had received in a Danish Red Cross parcel. The second time she was able to do the same with the contents of another Danish parcel. The third time she had nothing left with which to bribe the guards. Waiting on the line, stripped naked, she was resigned to death. Suddenly she was approached by German guards who informed her she had been saved. Count Folke Bernadotte had made an agreement with Heinrich Himmler to have all surviving Danish concentration camp prisoners shipped to Sweden for internment. ” 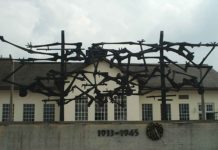 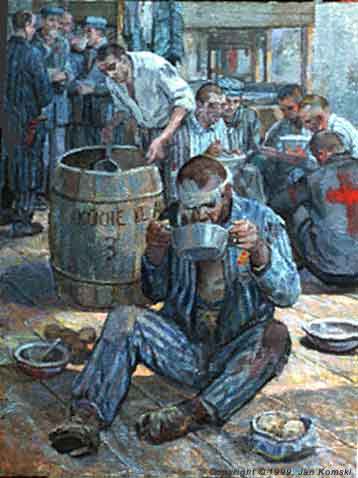 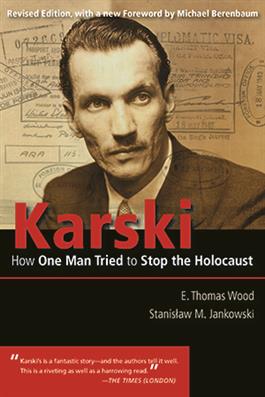