The Holocaust History – A People's and Survivor History – Remember.org
Home Liberation at Nordhausen

The photos were taken by a soldier of the VII Corps, who was involved in the liberation of Nordhausen. The photographs were taken during the actual events.

If you have questions or comments, please email John.Quale(at)downstate.edu

Establishment of Dora-Mittelbau at Nordhausen

In August 1943, asa result of an intense British air attack, the Germans decided to move their V-2 missile development program from Usedon Island to an underground facility. The Germans chose a hill called Kohnstein, approximately two miles from the town of Nordhausen. This mountain had been a site for tunnels for the storage of oil, gasoline, and poison gas. The assembly line for the V-2 rockets would involve two parallel and interconnected tunnels running north and south; upon completion, the tunnels would extend two miles into the mountains. To build this underground factory, the Germans decided to use prisoners from nearby concentration camps. By August 27th, the Dora-Mittelbau concentration camp was established just north of Nordhausen, with prisoners from Buchenwald transferred to the new camp. Prisoners consisted of political German prisoners and other Europeans, including those from France, Belgium, Russia, and Poland.

Prisoners were initially forced to live in the tunnels they were digging, seeing daylight only once a week. Smoke and dust filled the tunnels, and sanitary conditions were deplorable. As many as 50 prisoners per day died.

Initially, the dead were shipped to the Buchenwald crematorium, and quickly replaced with new prisoners. In December 1943, Albert Speer of the SS visited the camp and, to reduce the mortality rate among the prisoners, recommended building barracks outside the tunnel complex. In January – February 1944, thousands of sick and emaciated prisoners were transported from Dora-Mittelbau to the Majdanek camp to be exterminated. By March, the barracks outside the tunnels was constructed; included in this construction was a crematorium.

The VII Corps and the Normandy Invasion

Nearly 5000 miles away from Nordhausen, members of the VII Corps underwent their war preparations at Camp Sill outside of Lawton, Oklahoma. There, the trio of Corporal Jack Cousins, Sergeant Robert Fahrenbruch, and Private First Class John Quale joined the Message Center of the VII Corps Headquarters. On February 23, 1944, members of the VII Corps Headquarters began their journey to the United Kingdom in preparation for the Normandy invasion. Their crossing was troubled with rough seas, and on March 12th, they reached their destination in England. Within three months, the 4th Infantry Division and the paratroopers of the 101st Airborne participated in the D-day invasion of Utah Beach. With the subsequent arrival of the 90th and 9th Infantry Divisions, the VII Corps made slow progress across Normandy. Following the capture of Carentan, the VII Corps moved west toward Cherbourg, and the 90th and 9th

Infantry and the 82nd Airborne Divisions captured Barneville sur Mer on June 18th. Nine days later, after an intense battle, the 4th, 79th, and 9th Infantry Divisions and the 4th Cavalry Group had captured Cherbourg. Over 33,000 prisoners were taken by the VII Corps during this campaign, with 21,000 Americans killed or wounded.

By early July, the VII Corps’ destination had turned south. The 83rd Infantry Division met fierce resistance amongst the hedgerows, and on July 11th a panzer counterattack was repelled. The VII Corps was targeted to begin operation “Cobra”, to break through the Normandy Peninsula. Following intense bombing by Allied forces, on July 25th the 4th, 9th, and 30th Divisions led the attack, trailed by the 2nd and
3rd Armored Divisions and the newly adjoined 1st Infantry Division. By early August, the VII Corps had reached the base of the Contenton Peninsula, the 1st Infantry Division had captured Mayenne, and the 4th, 9th, and 30th Divisions were engaged in an intense battle at Mortain.

On August 7th, the 30th Infantry Division could only temporarily resist the German forces at Mortain. A counter-attack by the Allied 9th, 30th, and 35th Infantry Divisions and the 2nd Armored Division eventually fought back the Germans, and by August 15th, Mortain was re-occupied. The American 2nd Battalion had been liberated, and nearly 5,000 German prisoners had been captured. Under assault by Allied artillery and air forces, the fleeing enemy suffered heavy losses. The VII Corps was now able to move quickly across France, and by August 25th had reached the Seine. 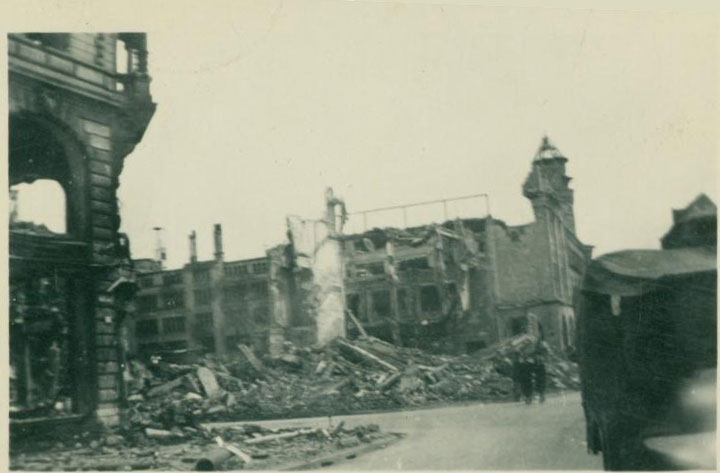 V-2 Rockets Made at Dora-Mittelbau Are Launched

On September 8th 1944, the first V-2 rockets were launched, hitting Paris, the Hague, and London. The German lines were collapsing, and the V-2 was their desperate attempt to salvage the war. The factory at Dora-Mittelbau was in full production.

Three hundred miles to the west of Dora-Mittelbau, the VII Corps had moved northward into Belgium. The 3rd Armored Division moved into Mons, and with the 1st Infantry Division, engaged the retreating German army from the west and took 30,000 prisoners. Remnants of these units, along with the 4th Cavalry and the 9th Infantry Divisions, then moved east along the Meuse River. By September 12th, the 3rd Armored Division and 1st Infantry Division had reached Germany. Along the way, Private First Class John Quale had traded a German Luger he had found for a camera; he could not have imagined the pictures that would be subsequently preserved.

On September 13th, the VII Corps made their assault onto Aachen. However, the progress of the VII Corps stalled due to supply (food and gasoline) problems. By October 21st, after fierce fighting, Aachen had fallen to the Allied Command. The 9th Infantry Division was sent into battle over the Roer River Dams, a vital area that needed to be secured before a full advance could be made across the Roer River.

As Aachen was falling to the Allies, Dora-Mittelbau was declared an independent concentration camp. Approximately12,000 prisoners now occupied the Dora-Mittelbau camp. Several subcamps, including ones located in Harzungen, Ellrich, Niedersachswerfen, Neusollstedt, and Nordhausen (the Boelke Kaserne) were established. Prisoners too weak to work at Dora were sent to Boelke Kaserne, and simply left to die.

In November, the VII and XIX Corps, under heavy air cover, began their advance into German territory. The 1st and 4th Infantry Divisions and the 3rd Armored Division were joined by the 104th Infantry (Timberwolf) Division. After fierce battles, Eschweiler and the Hurtgen Forest fell to the Allies. By December, the battle over the Roer River intensified, and the 5th Armored Division and the 83rd Infantry Division began to secure the Roer River Dam region. To the south, in Ardennes, the Germans were preparing a counter-offensive. On December 21st, the VII Corps returned into Belgium and Luxembourg to confront the German advance.

The VII Corps and the Battle of the Ardennes 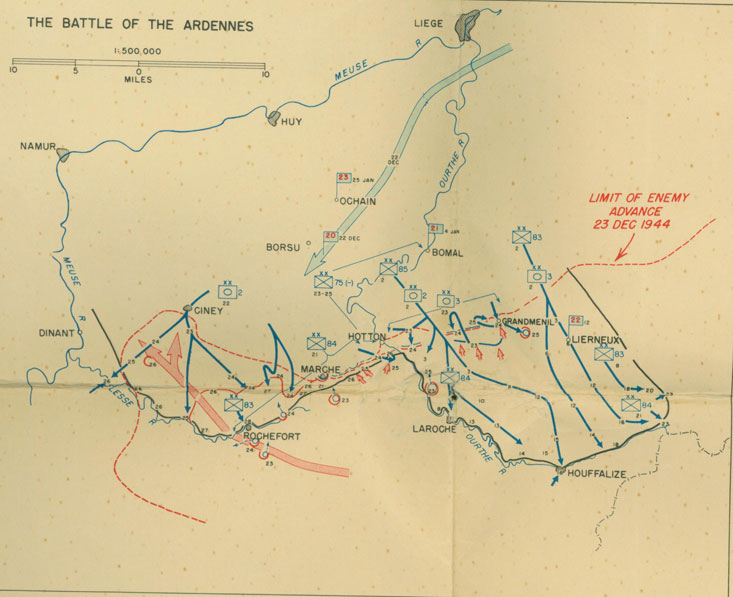 The Germans, with elite panzer divisions, made their push northward to retake the Meuse River and isolate the remaining Allied forces to the west. The 2nd and 3rd Armored Divisions, and the 84th Infantry Division, confronted the assault. Fighting intensified by Christmas, and by December 28th the tide had turned, and the Germans soon fell into retreat. In January, under bitterly cold weather, the First Army pursued the enemy, with the 2nd and 3rd

Armored and the 84th and 83rd Infantry Divisions advancing to the east. By January 16th the VII and VIII Corps had joined at Hoffalize on the Ourthe River. Meanwhile, two hundred miles to the east, the SS reported the population at the Dora-Mittelbau camp has swollen to
more than 29,000.

The VII Corps at Cologne and Bonn

The Capture of the Ruhr Pocket 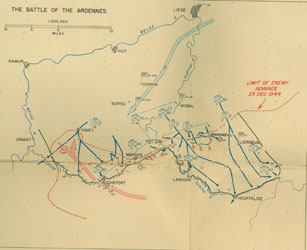 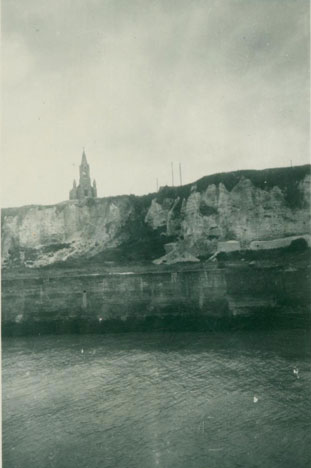 The 4th Cavalry joined the march to Cologne. By March 4th the 3rd Armored Division had reached the Rhine, and joined the 104th Infantry Division in the battle over Cologne. The utter destruction of Germany was evident everywhere, and by March 8th the VII Corps had captured Bonn. 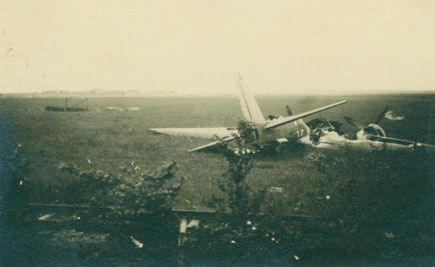 The VII Corps was just now 100 miles from the Dora camp, whose population declined to 20,000. On March 11th, the SS hung at least 50 prisoners at Dora-Mittelbau they suspected of developing a resistance organization. Following the Remagen bridge capture by the III Corps, the push across the Rhine was on. The 1st Division of the VII Corps crossed the Rhine, and additional bridges were built by the VII Corps engineers. In March the 1st and 78th Divisions moved northward along the Sieg River, and the 104th and 1st Divisions then pressed eastward. With the 3rd Armored Division, the troops moved further into German territory, and by March 28th Marburg had fallen to the Allies. The advance then turned north, with the VII Corps virtually encircling the enemy defending the Ruhr valley. By now, as the fall of Germany was imminent, the last of the V-2 rockets had been launched.

The 3rd Armored Division and First Army turned to Paderborn, and were joined by the 2nd Armored Division and the Ninth US Army. The intense “Rose Pocket” battle against the elite SS troops ensued. The 104th Division moved in the eastern zone, while the 1st Division advanced to the west. By early April the Ruhr region was captured, and over 30,000 German prisoners were gathered.

On April 3rd, an Allied bombing campaign targeted Nordhausen; bombs hit the Boelcke-Kaserne subcamp, killing 1500 prisoners. The following day, the Nazis began transferring prisoners out of Dora-Mittelbau to Bergen-Belsen and Ravensbrueck, forcing them to intolerable death marches. On April 7th, the First Army began to advance eastward to Leipzig and Dresden, and the VII Corps crossed the Weser River. Against sporadic resistance, the VII Corps pushed eastward and into the southern Harz Mountains.

On April 11th, the 104th Infantry Division entered the Dora camp and the 3rd Armored Division entered the Boelcke-Kaserne subcamp. Although members of the VII Corps had been forewarned there was a prison camp, they certainly could not have expected the inhumane atrocities they were about to witness. The dead and near-dead were everywhere, piled upon one another, and immediate medical attention was given to the few survivors. There were 3000 corpses and 750 emaciated survivors that were abandoned by the SS.

Of the 60,000 prisoners to enter the Dora-Mittelbau camps, it is estimated that 13,000-18,000 died in the camp. Common causes of death included tuberculosis, pneumonia, starvation, dysentery, and trauma.

The Allies insisted that the male citizens of Nordhausen bury the dead. Although the German civilians denied knowledge of the conditions in the camps, the Allies suspected they were fully aware of situation. The Allies burned the disease-infested barracks, and only the crematorium remained. 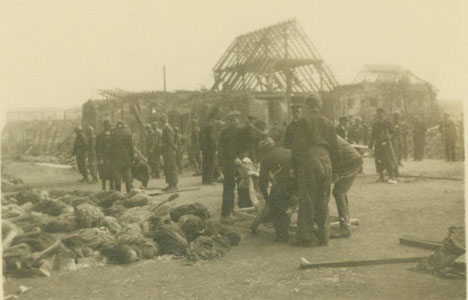 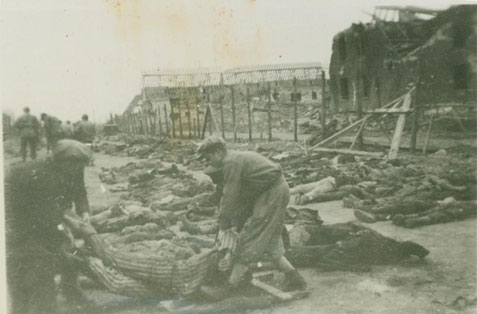 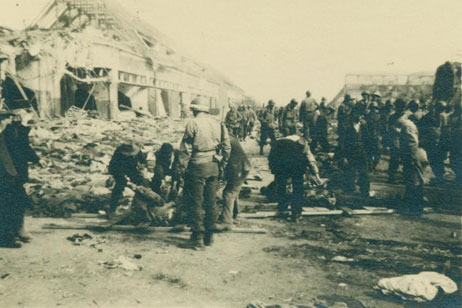 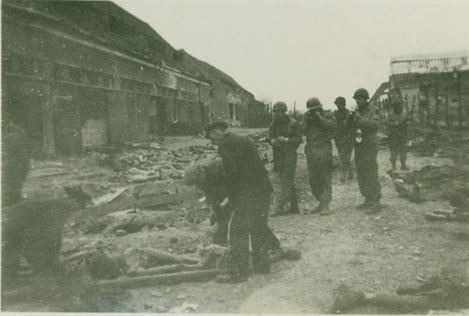 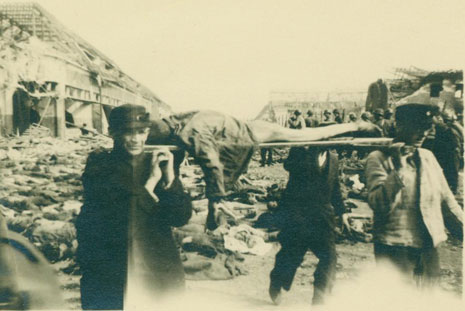 The somber events were only exacerbated on April 12th when it was announced that President Roosevelt had died. A US congressional delegation noted of the Germans: “They reached depths of human degradation beyond belief and constituted no less than organized crime against civilization and humanity for which swift, certain, and adequate punishment should be meted out to all those who are responsible”. The survivors declared Dora the “Hell of all concentration camps”.

The remaining V-2 missiles were quickly secured and turned over to the Allied inspectors. Overall, over 4500 V-2 missiles had been assembled by the Mittelwerk factory. 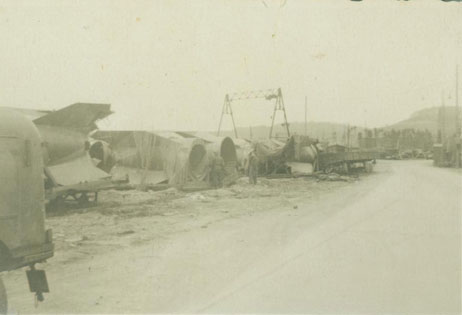 For the next several days, fighting in the Harz Mountains was intense, with the 104th Division securing the southern region of the hills. The 1st and 9th Infantry Division and 4th Cavalry Divisions eventually encircled the enemy and captured the Harz Mountain region. The capture of nearly 84,000 German prisoners quickly led to overcrowding in the prison camps.

On April 23th, combat activity of the VII Corps effectively ceased, their long mission accomplished. After nearly 11 months of battle, command of the VII Corps was transferred on May 6th from the First to the Ninth Army. On June 11, 1945, VII Corps Headquarters became non-operational. 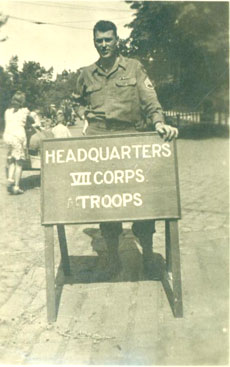 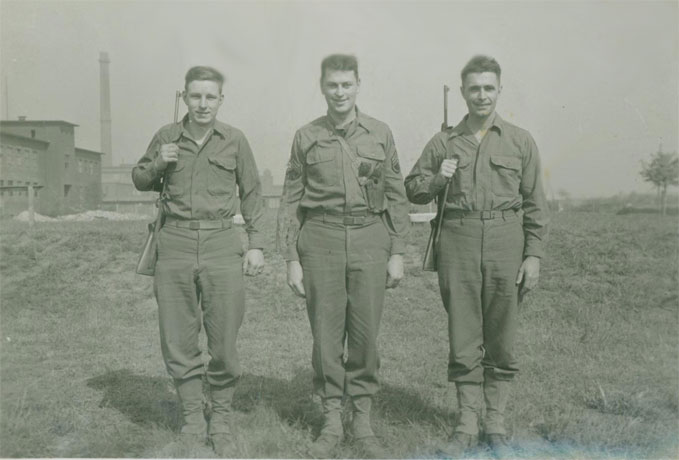 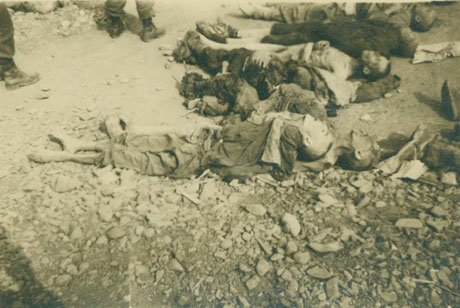 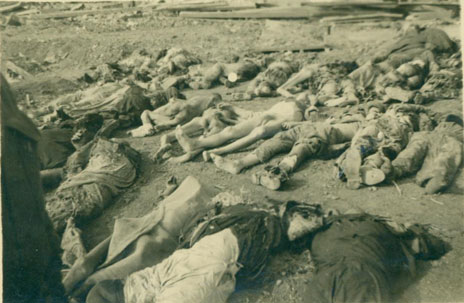 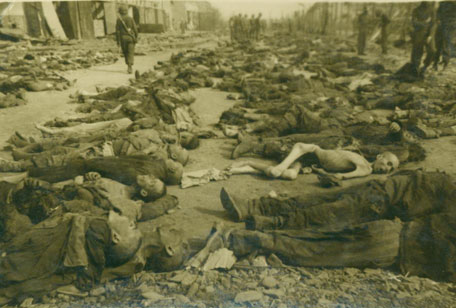 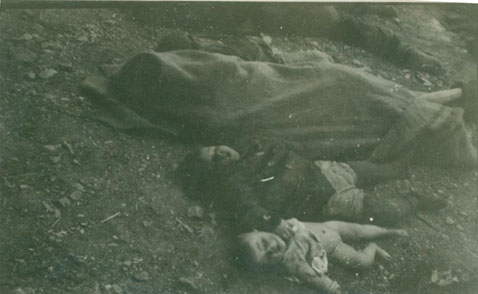 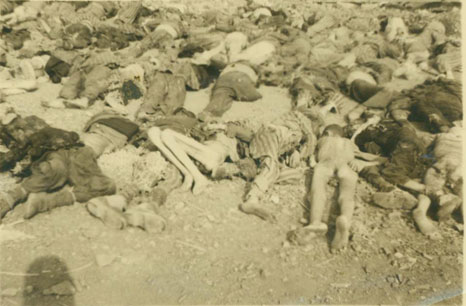 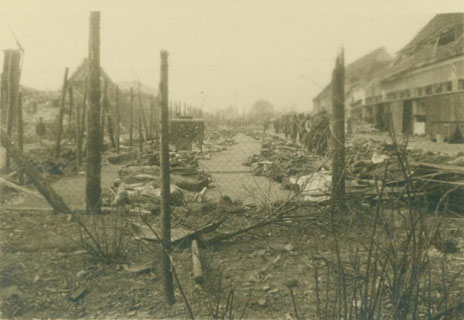 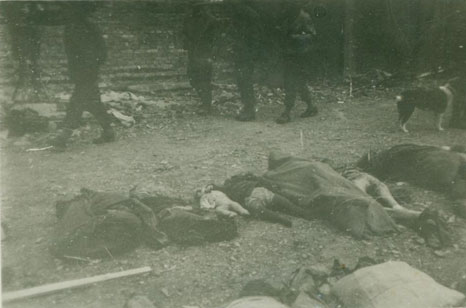 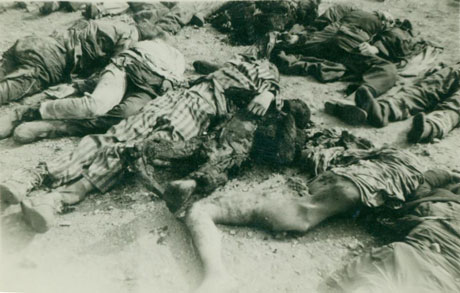 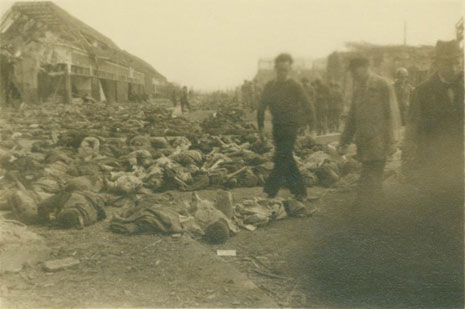